Considering the name of our blog - and its focus on the Islamicate world - we thought this book would be a fun way to start.  This text is what is known as a ratib, or an order of service, for a Sufi order in northwest China.  Although an innocuous looking thing, the arabic and chinese text on the front of the book gives a hint of the extraordinary inter-regional connections stretching right the way from Morocco to China which it represents.  The book is called the ‘Minshar’, which means ‘saw’ in Arabic; its name comes from the ‘sawing’ noise that Sufi members made while reciting dhikr out loud. 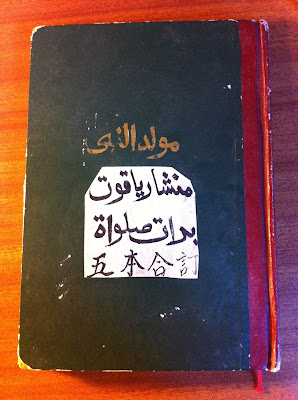 The book was lent to me by a fine scholar of Islam in China, Jonathan Lipman.  Jonathan found the text in Gansu Province in northwest China, and asked me to translate it (it is written in Arabic and Persian, as well as having a title written in Chinese on the front).  The book’s history is an exotic one, and revolves around the travels of a Chinese Muslim from the 18th century called Ma Laichi.  Although the sources conflict on exactly where he travelled, I’m pretty sure Ma Laichi travelled all the way to Yemen, and studied there with some major Sufi scholars, most likely it seems to me in the town of Zabid.  (Zabid was once a centre of religious learning; when I was last there in 2010 it was a real backwater and not the safest place to be either). 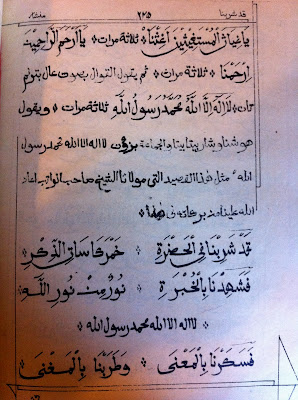 The book contains all sorts of weird and wonderful ‘drunken’ Sufi poetry, as well as passages from the Qur’an and well-known Islamic prayers.  It even has some poetry which can be matched to various poems in the ‘Dala’il al-Khayrat’ of the Moroccan Sufi al-Jazuli (d.1426).  Although we can’t be sure exactly where the book originally came from, what we can be say is that it stands as testament to a cultural world of shared ideas and texts stretching across the entire Asian landmass and into Africa.

While everyone is banging on about the rise of China and its ‘arrival’ into Africa and the Middle East, it’s worth remembering that there’s been plenty of connections between these seemingly distant parts of the world stretching back centuries – and that Islam had a big part to play in making it all happen.
Posted by Tommy Wide at 11:06 PM